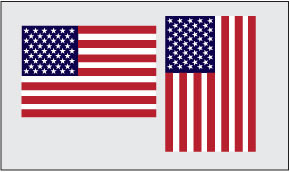 When displayed either horizontally or vertically against a wall, the union should be uppermost and to the flag's own right, that is, to the observer's left. When displayed in a window, the American flag should be displayed in the same way, with the union or blue field to the left of the observer in the street. No other flag or pennant should be placed above, or, if on the same level, to the right of the flag of the United States America, except during church services conducted by naval chaplains at sea...for personnel of the Navy...when the church pennant may be flown above the flag. 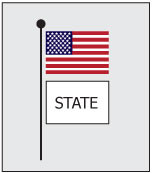 Displaying a US Flag with a State Flag

When flags of States, cities, or localities, or pennants of societies are flown on the same halyard with the flag of the United States, the latter should always be at the peak with six inches between each flag. 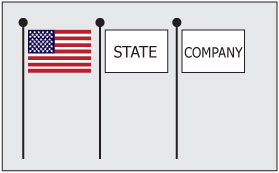 Displaying a US Flag with a State or Company Flag

When the flags are flown from adjacent staffs, the American flag should be jousted first and lowered last. No such flag or pennant may be placed above the flag of the United States or to the United States flag's left. 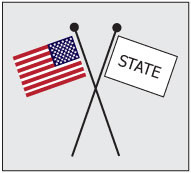 The American flag, when displayed with another flag against a wall from crossed staffs, should be on the right (the flag's own right) and its staff should be in front of the staff of the other flag. 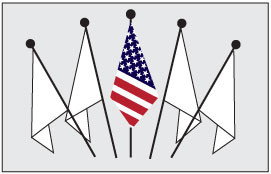 Displaying a US Flag with Mulitple Flags

The American flag should be at the center and at the highest point of the group when a number of flags of States or localities or pennants of societies are grouped and displayed from staffs. 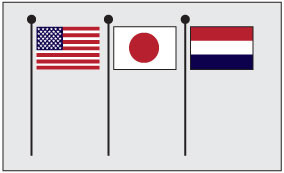 Displaying a US Flag with International Country Flags

When flags of two of more nations are displayed, they are to be flown from separate staffs of the same height. The flags should be of approximately equal size. International usage forbids the display of the flag of one nation above that of another nation in time of peace. 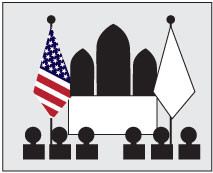 Displaying a US Flag around a Speaker's Platform

When used on a speaker's platform, the flag, if displayed flat, should be displayed above and behind the speaker. When displayed from a staff in a church or public auditorium, the flag of the United States of America should hold the position of superior prominence, in advance of the audience, and in the position of honor at the clergyman's or speaker's right as he faces the audience. Any other flag so displayed should be placed on the left of the clergyman or speaker. This will make the flag on the right of the audience.

Displaying a US Flag at Half-Staff

The flag, when flown at half-staff, should be first hoisted to the peak for an instant and then lowered to the half-staff position. The flag should be again  raised to the peak before it is lowered for the day. On Memorial Day, the  American flag should be displayed at half-staff until noon only, then raised to  the top of the staff. By order of the President, the flag shall be flown at  half-staff upon the death of principal figures of the United States Government and the Governor of the State, territory or possession, as a mark of respect to their memory.

In the event of the death of other officials of foreign dignitaries, the flag is to be displayed at half-staff according to presidential instructions of orders, or in accordance with recognized customs practices not inconsistent with law. In the event of the death of a present or former official of the government of any State, territory or possession of the United States,  the Governor of that State, territory or possession may proclaim that the National flag shall be flown at half-staff.

The flag shall be flown at half-staff thirty days from the death of the President or a former President; ten days from the death of the Vice President, the Chief Justice or a retired Chief Justice of the United States, or the Speaker of the House of
Representatives; from the day of death until internment of an Associate Justice of the Supreme Court, a Secretary of an executive or military department, a former Vice President, or the Governor of a State, territory, or possession; and on the day of death and the following day for a Member of Congress. The flag  shall be flown at half-staff on Peace Officers Memorial Day, unless that day is also Armed Forces Day.

Flags flown on poles affixed to a home or building are not to be flown at half staff but a memorial streamer may be affixed to the top of the flagpole. 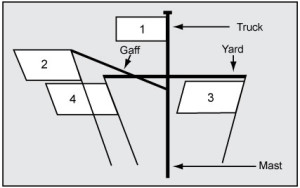 Displaying a US Flag during Maritime

It is display
#3 which causes the most confusion. This puts the club burgee in a higher position physically, but not above that of the U.S. Ensign (flag) symbolically. By the normal Flag Code provisions, this would seem to be an incorrect display. The tradition of the seas, however, is to hold the gaff as the position of honor; thus, the intent of this tradition and display is to give proper respect to the flag.

Where a yard is involved, rules provide that when a foreign ensign is displayed, the U.S. Ensign (flag) is flown at #3; the foreign ensign at #4; the club burgee at #1; and other flags at #2.

The gaff extends aft (to the rear), and a mast on yacht club grounds is faced seaward. Therefore the gaff will (or should) be directed toward the land. The observation point then becomes a point somewhere
on the sea side of the mast. This then makes the placement of the U.S. Ensign
(flag) in regard to the foreign ensign conform to Flag Code provisions.

Displaying a US Flag on a Vehicle

When the US flag is flown alone, it needs be at the center on the back of the motorcycle, or to its "marching right." The "marching right" is on the right side of the motorcycle to the rider's perspective when facing forward. If the US Flag is on your bike with another, it should be to its "marching right." All flags flown with the US Flag are the same size and at the same height of the US Flag. While the US Flag is on your bike with several other flags the US flag is placed at the center and highest. Other flags should be arranged in alphabetical order and in decreasing importance - Nations first, states (in order of admittance) and territories second, military third (in order of establishment), and then any others. 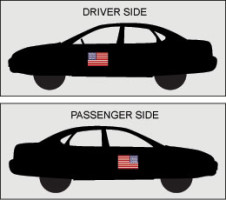 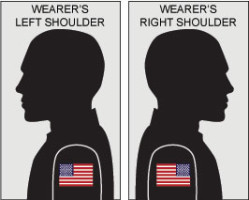 Displaying a US Flag: Other

"No part of the flag should ever be used as a costume or athletic uniform. However, a flag patch may be affixed to the uniform of military personnel, firemen, policemen, and members of patriotic organizations. The flag represents a living country and is itself considered a living thing. Therefore, the lapel flag pin being a replica, should be worn on the left lapel near the heart."

The National Flag Foundation suggests "...we recommend that the flag patch on the
left sleeve of a uniform should have the union to the viewer's left while a patch on the right sleeve should be displayed with the union to the viewer's right so that, in both cases, the flag is facing forward and is streaming to the back as the person moves forward." Read more about the National Flag Foundation by visiting their Web site at www.AmericanFlags.org.